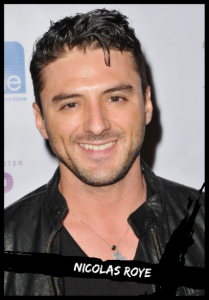 Born in New Jersey and raised in Louisiana, Nicolas Roye is an American actor known for voicing major roles in video games, anime, and animation.

Nicolas is recognized as the voice of many characters in anime and animated series, such as Chuya Nakahara in Bungou Stray Dogs, Shiui Uchiha in Naruto Shippuden, Mikey Kudo in Digimon Fusion, Arata Inanaki in Twin Star Exorcists, Randolph & Amos in If It’s For My Daughter I’d Even Defeat a Demon Lord, Masato Sanada in High School Prodigies Have It Easy Even In Another World, Star Wars Galaxy of Adventures and Star Wars Fun Facts, Legend of the Three Caballeros as Vomit, Subway Surfers as Jake, NFL Rushzone as Ricky, Mecard as Ryan, The Grossery Gang, and Disney Jr’s Guess How Much I Love You.

A graduate in theater from University of New Orleans, Louisiana, Nicolas has a multitude of stage credits including the leading roles of Pale in Burn This and Sebastian in Shakepeare’s Twelfth Night.