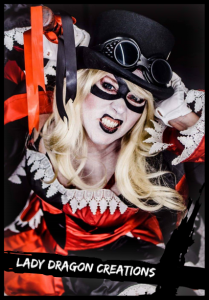 Lisa started making costumes for cosplay and going to conventions in the spring of 2014. At the time she didn’t know how to sew, so her mom helped her with her first cosplay. After that it was all her and there was no stopping! Now a few years later and more than 80 cosplay costumes made, she learned a lot and loves sharing what she’s learned.

Lisa cosplays as many different characters, but she is best known for her many variations of Harley Quinn. And with each new cosplay that she finishes, ideas for the next one is already in the works. Lisa has won multiple awards for her outfits and her work has been shown in Cosplay Culture magazine, as well as other publications.